DOC NYC, November 2 – 10, Greenwich Village, “Girl with Black Balloons” and “Eames: the Architect and the Painter” 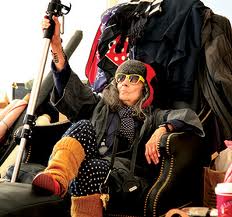 Bettina, the subject of "Girl with Black Balloons."

“DOC NYC,” the documentary film festival now in its second year in Greenwich Village, from November 2 – 10, is presenting several documentaries about artists working in a variety of art forms.  Two of these documentaries, “Girl with Black Balloons” and “Eames: the Architect and the Painter” focus on different kinds of artists.  One works alone and the other, actually two artists, worked as a pair.   The subject of “Girl” is known simply as Bettina, while the subject of “Eames” is the well known design couple, Charles and Ray Eames.

“When you concentrate on one thing, other things come into being.” The quote, spoken by Bettina, the subject of Dutch filmmaker Corinne van der Borch’s intriguing documentary, “Girl with Black Balloons” actually sums up the film and its approach to its subject.  Bettina, an elderly resident living in New York’s Chelsea Hotel, at first seems to be just another eccentric, New York pack rat / bag lady, about an inch away from homelessness.  She has lived in the hotel for the past 40 years.  Bettina’s room is filled with boxes.  She has just enough space for a lawn chair, which she uses as a bed.  However, as we stay with Bettina, our perception of her, and of who she is, begins to transform.  “Girl” becomes a story about singular devotion to art.  Corinne ponders, “I wonder how someone ends up like this, all alone.”

Watching “Girl” I was reminded of the book “Letters to a Young Poet,” by poet Rainer Maria Rilke.  Rilke tells the young poet, to whom he is writing, that he must work in isolation in order to pursue his art.  As if taking a page from Rilke’s book, Bettina, by choice, has lived alone, without a partner or social life, for the past 40 years.  “If I wanted to do my work, I had to be alone,” Bettina explains to Corinne in one of the many interviews the director conducted with her over two years. “I love my work,” Bettina explains.  “I couldn’t stop.  It just kept flowing through me.”

Eventually we see that the numerous boxes contain artwork that Bettina has created over the years but which, except for a 1980 exhibition, has never seen the light of day.  “I succeeded in getting my work done but not in getting it out there,” Bettina explains.

In marked contrast to Bettina is the story of the late husband and wife design team, Charles and Ray Eames, as depicted in the very interesting documentary “Eames: The Architect and the Painter.”  Like Bettina, Charles and Ray had a singular devotion to their work, but, unlike Bettina, they certainly got their work “out there.”  Their  projects  emphasized form as well as function, most notably in the creation of the iconic Eames Chair.  The Eames matto: “Make the best for the most for the least.”

The Eames’ creations hit the zeitgeist of post World War II American culture, making them enormously influential and successful in the worlds of architecture, furniture design and art. They also created toys, games, multi-media exhibits, films and photographs.  The Eames’ work is described as a marriage of art and industry.

Directors Jason Cohn and Bill Jersey have drawn upon a wealth of material including films, television appearances, photos, letters and, of course, artwork for the “found footage” portions of their documentary.  In addition, the filmmakers interviewed designers who worked at the Eames famous Venice Beach studio, nicknamed “The Eamery,” where creative freedom was the order of the day.  “Eames” is informative and fast moving with an interesting visual palette that nicely conveys a multi-dimensional story about art, ego, a relationship and the nature of success.

Taken together, “Girl” and “Eames” not only present two different approaches to art and artists, but also two different approaches to documentary filmmaking.  While “Girl” follows its subject over time, showing us things as they happen, “Eames” is an “after the fact” portrait.  Both films present their subjects as originals not just in terms of their work, but in who they are, or were, as human beings.

Up until 2009 Seth Shire spent nearly two decades in the New York film industry as a post production supervisor of feature films. Highlights include working on the films of Martin Scorsese, James Toback and Spike Lee. Since leaving the film industry Seth has expanded into new and varied areas where he has found a great deal of satisfaction. Seth currently teaches in the Sociology Department of CUNY Queens College. His courses include "Mass Media and Popular Culture," "Introduction to Sociology," and "Sociology of Cinema" where he is a very popular teacher. Seth is also the film critic for "Town & Village," a Manhattan weekly newspaper, a position he has held for the past six years. Seth gives back to his community through volunteer teaching at Manhattan's "The Caring Community," a center for senior citizens, where he teaches a very popular course on documentaries called "The Golden Age of the Documentary. In the fall of 2010 Seth taught "Critical Reading and Writing" at Parsons School of Design. He has also taught "Cinema Studies" at the New York Film Academy. Seth lives in Stuyvesant Town, in Manhattan.
View all posts by unpaidfilmcritic »